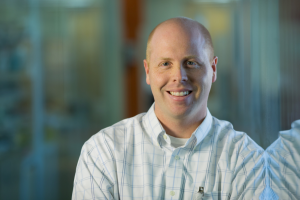 Mechanisms of hemoglobin a-regulated nitric oxide signaling in endothelial cells
Nitric oxide (NO) signaling regulates arterial vascular reactivity in the microcirculation to control peripheral vascular resistance and thus blood pressure.  Recently, it was reported for the first time that hemoglobin a is expressed in arterial endothelial cells (ECs), where it is in complex with endothelial nitric oxide synthase (eNOS) (Straub et al., Nature 2012). It was demonstrated that endothelial hemoglobin a is enriched at the myoendothelial junction, the point where endothelial cells and smooth muscle cells make contact in resistance arteries and arterioles, where it regulates the effect of NO signaling on vascular reactivity.  Mechanistically, hemoglobin a heme iron in the Fe3+ state permits active NO signaling, and this signaling is shut off when hemoglobin a is reduced to the Fe2+ state by endothelial cytochrome B5 reductase 3 (CytB5R3).  These data reveal a novel paradigm by which the regulation of intracellular hemoglobin oxidation controls NOS signaling in non-erythroid cells. This paradigm may be relevant to a broad range of other somatic cells discovered to express hemoglobin (i.e. neurons, renal mesangial cells, macrophages, sympathetic nerves, hepatocytes, alveolar epithelial cells, and endometrial cells) and also known to express NOS isoforms. Our studies will be a direct outgrowth of this work, where we will focus on the molecular, cellular, and in vivo contribution of somatic hemoglobins and CytB5Rs as it pertains to vascular physiology and disease.

Redox regulation of soluble guanylate cyclase by cytochrome b5 reductase 3

Cardiovascular disease (CVD) is the leading cause of death in many developed countries.  Multiple pathophysiological conditions contribute to CVD, including systemic hypertension, atherosclerosis, stroke, and heart failure.  One of the key pathways dysregulated in CVD is the nitric oxide(NO)/soluble guanylate cyclase (sGC)/cGMP signal transduction pathway, which is critical for vascular health.  Loss of endothelial NO production and/or the inability of sGC to sense NO to contribute to CVD. sGC is a heme protein that can exist in the reduced, sensitive form (Fe2+) or in the oxidized, insensitive form (Fe3+), of which, the former binds NO to generate cGMP needed for vasorelaxation, anti-inflammatory actions, and anti-apoptosis signaling.   We recently discovered that cytochrome b5 reductase 3 as the first sGC heme iron reductase critical for maintaining sGC heme iron in the reduced, NO sensitive state (Rahaman, Nguyen et al Circ. Res. 2017) . Ongoing studies focus on systemic hypertension, sickle cell disease and heart failure and the role Cyb5R3 plays in cGMP signaling.  We are currently funded by the following grants:  NIH R01-HL 133864, R01-HL 128304 and a Bayer Sponsored research contract.

2006- Kletei Prize for Excellence in Environmental Health, University of Pittsburgh